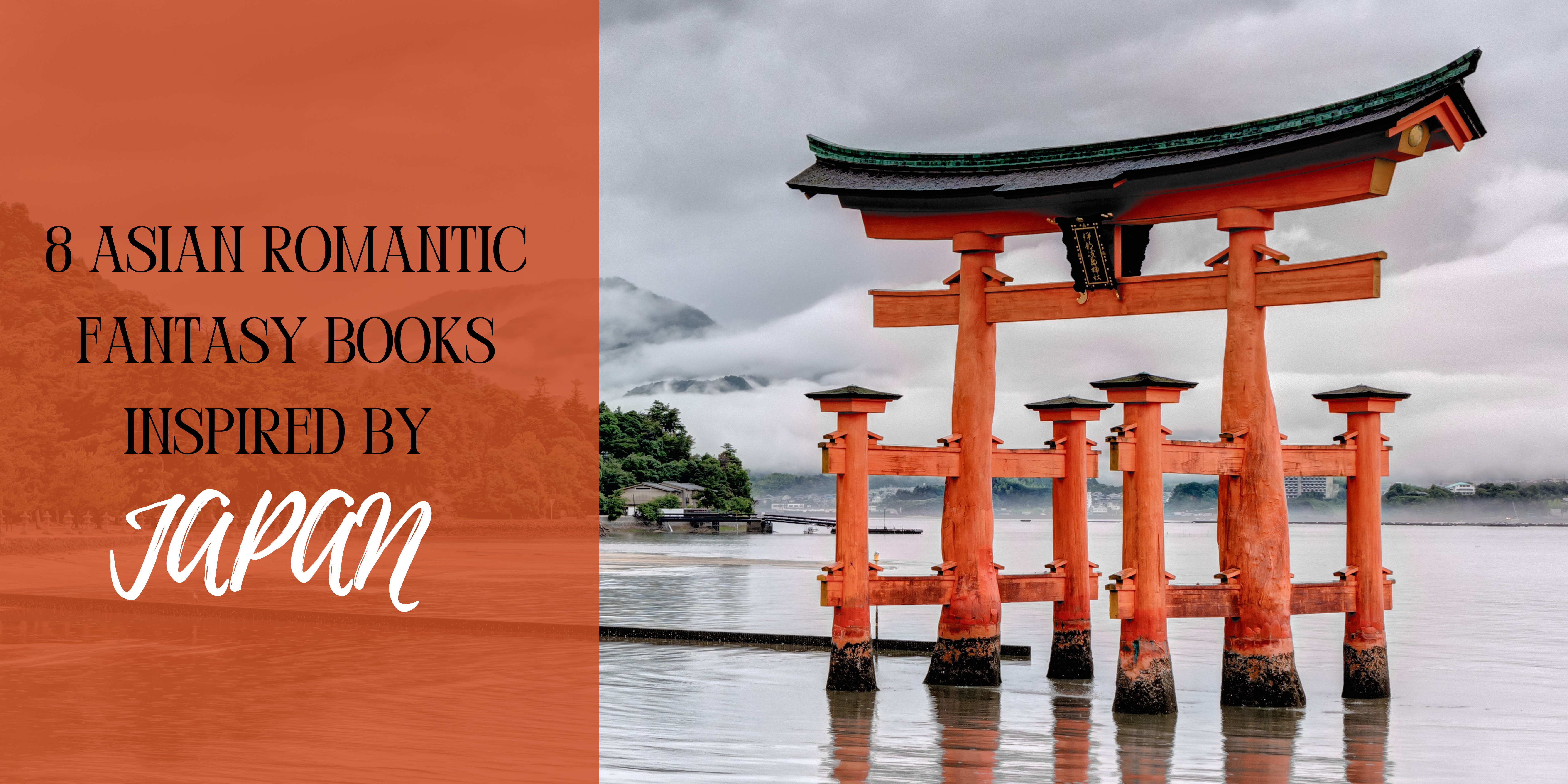 Fans of Japanese culture rejoice! Today, I am sharing eight incredible stories set in Japanese-inspired worlds that capture the spirit of Japan’s history and mythology. And seeing as “8” is considered a lucky number in Japan (symbolizing prosperity), these books will certainly make your reading time bright and full of promise!

Note: Any steam/heat levels mentioned below are based on the Romantic Fantasy Shelf Heat Scale.

Contemporary romantic fantasy. Kicking off the list is, in this author’s humble opinion, a masterpiece in the Asian romantic fantasy sphere. Emi is a young naive woman blindly fulfilling her singular role in life — to become the vessel for the goddess Amaterasu’s return. When she meets Shiro, a kitsune without memories of his past, the truth of her destiny quickly unravels. Emi escapes the confines of her sheltered life with Shiro (who owes her a debt) and embarks on an incredible adventure filled with dangerous yokai, vengeful gods, and a slow-burning forbidden romance that will absolutely grip your heart and never let go. Seriously, the feels in this series are just ::chef’s kiss::. The heat level starts Warm but kicks up to Steamy by the final book. RED WINTER is the first book in the completed trilogy synonymously titled “Red Winter”.

2. Shadow of the Fox by Julie Kagawa

Young adult romantic fantasy. Another must-read of the genre. Half-kitsune Yumeko is forced to flee her adoptive family with a piece of an ancient scroll — something that others would kill to obtain. After all, whoever has the scroll can summon the great dragon god and make a wish. Yumeko forms a tenuous alliance with the mysterious samurai Kage Tatsumi, who not only carries a demon-possessed sword, but is also on a mission to find the coveted scroll. Thrust into a dangerous world of secrets and deception, Yumeko discovers she alone holds the fate of the world in her hands. Kagawa’s sweeping series is rife with supernatural creatures from Japanese mythology, action, and adventure, all set in a lush world steeped in folklore with budding romantic tension between Yumeko and Kage. SHADOW OF THE FOX is Book 1 in the completed “Shadow of the Fox” trilogy.

Fantasy romance. In this Little Mermaid retelling, Rin is a kitsune turned human thanks to a witch’s curse. If she can make Hikaru, son of a clan lord, fall in love with her before the next full moon, she will return to her true form. But Hikaru is betrothed to another, and his mission is to protect his clan from yokai at all costs. Without her voice, Rin must risk all to cross the divide between their worlds. Andrews presents a magical world of intrigue and complex characters, adventure, and a beautiful romance guaranteed to pluck at your heartstrings. KITSUNE is the first book in the completed “Tales of Akatsuki” series, of which each installment retells a different fairytale.

Epic romantic fantasy. In this pan-Asian saga, four immortals must band together to save the Sun Emperor. Though set primarily in a xianxia-inspired world, Pawlicki has incorporated elements from both Japanese and Chinese mythology, creating a unique combination of gods and creatures along with a well-constructed magic system, court intrigue, and action. The story follows two interwoven stories deftly crafted with likable, well-developed characters: Bai the first immortal and Nanami the thief, and Xiao the God of Pleasure and Jin the Goddess of Beauty. Heat level for the series is Warm (fade-to-black) with some darker themes being addressed. VOWS OF GOLD AND LAUGHTER is the first book of the “Immortal Beings” duology, of which a related standalone novel also follows.

Post-apocalyptic fantasy reverse harem. Alice (Chiori), destined to become a demon hunter, flees from her home after being tormented by her peers. Crossing paths with Makkai, an ill-tempered kitsune, a power within her awakens, forcing her to choose between returning to her old life or starting a new one among demons. Mack draws on Shinto mythology — though not exclusively — weaving demons and gods, fae, witches, and other fantastical creatures into her unique, contemporary/futuristic world. A note that Alice/Chiori is age twelve in this first installment (which despite its substantial length is akin to a series prequel), and as such there is no heat/steam. However, the following books in the series fall under the Steamy heat level as Alice/Chiori comes of age and her harem forms. HALF-BREED is Book 1 of the series “Taming the Elements” (series incomplete as of this article) and contains adult themes with some trigger warnings.

Portal fantasy romance. Former pianist Ciara suddenly finds herself in 16th century Japan. Her only chance of surviving this strange, violent past lies in Katsuo, a samurai warlord. As Ciara’s magical abilities come to light, she must navigate a world of supernatural creatures, danger, and intrigue, as well as a blossoming romance with a man she was never supposed to meet. Grove’s knowledge of and passion for Japanese culture shines through with the historical touchstones woven into her world. There is plenty of romance to savor as Ciara must ultimately choose between remaining with Katsuo or returning home. SWORD AND MIRROR is the first book of the “Yokai Treasures” series, of which each installment follows a different couple. There are also four companion short stories available.

7. The Serpentine Throne by Susan Stradiotto

New adult romantic fantasy. Mairynne, youngest daughter of Nantai’s former emperor and empress, must become the new leader of her country — a role she never wished for. Carrying two soul stones from her lost parents, she flees her sheltered life along with Gensui, the city’s first guard and her protector. Thus begins an epic quest across the land to find her father and return him to the Serpentine Thrones. Along the way, she discovers untold prophecies, faces danger at every turn, gains new companions, and uncovers her magic. Mairynne experiences relations with multiple partners on her treacherous journey, both male and female, with some heart-pounding steam on page. THE SERPENTINE THRONE collects all five books of the synonymously named series “The Serpentine Throne”.

Romantic fantasy reverse harem. Rounding out the list is an epic story featuring the strong-willed and justice-minded Ema, a former assassin questioning her duty and loyalties in the wake of her clan’s — and her former lover Ryo’s — betrayal. Sentient death shadows encroach upon the world as the country of Hinae falls prey to a corrupt and murderous prince. On the run, Ema gains an unexpected trio of allies: Saitama, the stern but compassionate commander, Hagane, the rogue with a heart of gold, and Akhito, the cold and mysterious assassin. Together, they must overcome the struggles of their pasts to stop the destruction of their future. The worldbuilding draws inspiration from the late Edo period of Japan, a time of upheaval on the eve of great change, while the characters each embody different tenets of Bushido — the samurai warrior’s code. Rich with intrigue, enemies-to-lovers and found family vibes, action, and a steamy slow-building romance, VISION OF THE MOON is the first book in the “Shadowed World Saga” (series incomplete as of this article). The series prequel Promise of the Storm and a short story are also available.

Have you read any of these stories? Do you know of more romantic fantasy books inspired by Japan? Share in the comments!

Catharine Glen is a romantic fantasy author residing in New England. Her favorite kinds of stories take place in faraway worlds with unforgettable characters, plenty of romance, adventure, magic and the supernatural. (More...)