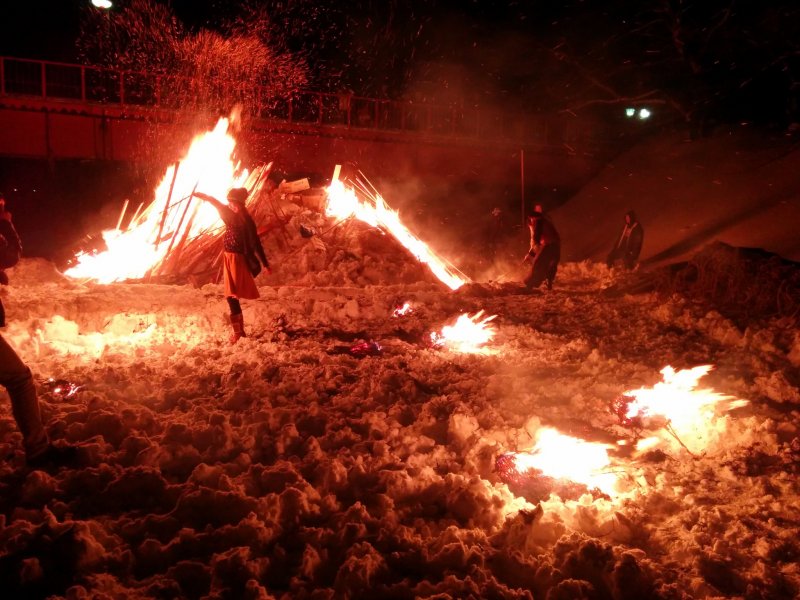 This is a short scene with Ema and Ryo, taking place several years before Temper the Soul / Promise of a Storm. I hope you enjoy it!

Ema shivered under her haori. The winter festival was upon them again, held on the coldest of days. Yet even with the giant blaze igniting the night sky, the warmth couldn’t seem to find her.

Men danced and hollered amidst the beating of drums and cheers from the crowd. They hurled ‘lucky’ items into the flames to ward off misfortune and evil spirits and bring prosperity to the clan.

She’d never been particularly superstitious, but it was worth it for the loincloths alone.

Though… Ema clutched the omamori against her chest, hidden beneath layers of clothing. Maybe this year…

Ryo, his shaggy hair undone and soaked in sweat, broke from the revelry and dashed over patches of snow with bare feet and a wild grin.

“Where’s the fun in that?” He laughed, wrapping an arm around her and nuzzling into her neck.

“Then warm me up.” Tugging on the stubborn tie keeping her haori closed, Ryo groaned. “Come on, Ema, let me in.”

“That’s cheating.” She swatted his hand away. “If you keep moving, you won’t be cold.”

Ryo smiled with that dark, suggestive glint in his eye Ema knew all too well.

“You do realize the festival is not over yet,” she added, her cheeks tingling with heat.

“Then come down and join us.”

“Luckily, I’m exempt from stripping down to fundoshi and freezing my ass off.”

He grabbed said cloth wrapped around his waist with a smirk. “Oi, Ema, live a little.”

“Hmm, is that so?” Ryo fingered the collar of her coat. “I’d love to see you dancing naked in the snow, the fire blazing in your eyes. Like a snow goddess, descended to earth, seeking her lover…”

She gave him a playful shove, suppressing a smile. “Not happening.”

“Can you blame me?” He cocked his head, eyes wide with feigned innocence.

Laughing, Ryo clasped her hand. “Alright. Next year then.”

Ema rolled her eyes as a chuckle escaped her lips. “You really ought to get back before you freeze.”

“Are you?” He squeezed gently.

The amulet still clutched in her other hand, she sighed. It was time to give up something of herself to the flames. “Here.”

His eyes widened when he realized what it was. “Ema…”

“It’s okay. I will always have their memories with me.”

“But… hells, Ema. You don’t even believe in all this.”

She nodded, pressing the omamori firmly in his palm. “But they did.”

Lips pressed together, Ryo closed his fingers around it and brought his hand to his chest. “I’m honored to do it for you, Ema. For them.”

Amidst the beating drums and the cheers and shouts, a solemn silence fell between them. Ryo understood the weight of what she was asking. It was more than an offering to the supposed spirits. She had to move on from their deaths. Father and Mother would have wanted that.

He visibly shivered. “Come with me, closer to the fire. It’ll be over soon.”

Ema followed, down to the bonfire and into its sphere of intense heat. It didn’t take long before sweat soaked her forehead, neck, and under her breasts. She huddled deeper into her haori, holding that warmth close to her chest as Ryo committed her offering to the spirits.

Ema breathed out, long and slow.

The dance went on, the drums increasing in speed and intensity, the men dancing faster to match the near-feverish rhythm.

And then, the thundering ceased altogether. Intense silence, followed by a final cheer from the remaining crowd. The festival-goers dispersed, seeking out warmer places to spend their evening. Soon, only the monks would remain to oversee the fire as it burned out.

Returning to her side, flushed and panting, Ryo palmed her cheeks with ice-cold hands. “You okay?”

She nodded, pressing her forehead against his. “Thank you.”

“Let’s go home, Ema.” He scooped her up and took off in a run. She yelped and clung to his neck, rewarded by a bout of his infectious laughter. He carried her all the way back to the castle and straight to his quarters in his family’s residence. Someone had lit the lanterns for his return, the room a warm cocoon. Already, she could feel her own chills thawing.

Easing her down, Ryo flopped to the floor, a shivering, tired mess. “Thank hells, that’s only once a year.”

“But your soul has been purified by the snow and flames.” Ema mimicked the monks’ words as she retrieved a fresh yukata, then knelt to help him dress.

“My body could use a bit of that purification.”

“You,” she said, evading his tempting grasp, “need to get warm and rest. Remember when you were sick for a month?”

“Don’t remind me,” he groaned, lying back on the futon.

“I don’t know how you do it every year.” She tucked the blankets around him, then worked on drying the sweat from his hair. “But it means a lot to the people of Nagheyami-to. And to Taisho.”

“It’s worth it just for this.”

Ema met his gaze, those cinnamon-brown eyes she knew all too well, darkened by shadows of his growing fatigue. His lip quirked in that subtle, expectant way that set her heart thumping harder.

“I know.” She leaned in, pressing her lips against his. Still so cold. Cupping his cheek, she stroked his chilled skin with her fingertips.

“Ema,” he whispered between kisses. “This is… going to sound… a bit shocking.”

“I’m… too tired.” He peeked up with a single eye, an eyebrow raised.

She chuckled, shaking her head. “You’re right. I am shocked. Maybe you really were purified tonight.”

“Doubtful. The mind is always willing. It would take Death itself to change that.”

Ema shuddered. “Then we’ll just keep each other warm tonight. Like we always do.”

He pushed back the blanket. “Get in here.”

Slipping inside, she snuggled against him, giving what she could of her warmth. The heat between them grew, as intense as the bonfire, and the chill soon ebbed from his body. His breathing slowed, chest rising and falling in a steady rhythm. Ema smiled, gaze sweeping over his face one last time before closing her eyes.

His arm remained curled around her back, keeping her close through the night.